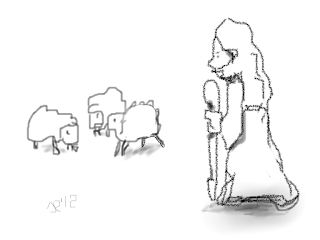 I was furious when someone took a better picture than me. It was a photo shoot and the original photographer was going somewhere and left the gear. Some of us  was playing with his gear.

We were trying to take a picture of us jumping. I took the initiative to be the photographer. The person in question was telling me what to do with the camera.

Geez, the person was a Nikon holder and the camera was Canon 550D. I was kinda irritated when a Nikon holder told me about how to use a Canon. I have played with Canon camera a long time.

My picture was kind of post-jump. But, when the person redo the process, the person took a better moment. I took my defeat by sit down and rethink, furiously.

I was furious because if I was given a second chance to take the picture, I could produced better picture. I mean,  something that made my rage not coming out was this: if we compare the two pictures, my picture had the object locked in the middle while the person's object was too high.

Well, thinking back about what was happening, I understand something. I wasn't furious about the person's mindlessly jumping to help. But, I was furious because I wasn't at my best anymore.

I fear I have no longer competitive.

That's a fear coming from a person who has a motto, "innovate or die". And I think this thing truly show me what I have become: "A man slowly die inside". I have lost on a battle that I think I could excel a little bit. This might be an iceberg of my total lost.

I have produced nothing but slowly sinking into the habit of reading comics. I usually looking back at each year and saw something achieved. Be it FOSS, smart card, virtualization, etc. And looking back at 2011, I did nothing.

One of my dream was it would be cool if I could take other people with me and do something about Indonesia. I mean, from my experience, it only took lesser people than we imagine just to do something useful.

One of my friend in Depkominfo was doing his greatness to administer many FOSS events. When he fled and studied abroad, no more event. And at that time I realize that we don't need a lot of people. Just a few good men and women with guts.

I love to have those kind of people. Some people challenged me to step up and took the responsibility. But, I wasn't a fool and won't be. It takes a lot of more people to be able to change something big like a rotten system.

I could be running out of gas if I forced myself to do them by myself. I could even be the next Darth Vader. I have found out that many jerks in this country was once a Jedi, morally composed and high expectation. Until they suddenly faced against the wall and crumbled. And from their ashes born a cruel Sit.

We need more people to be able to change Indonesia. Especially, the young people.

People with passion and not longing for American Dreams. Where could we find that kind of people? Interestingly, we could find them from religious culture. We could nurture them there.

There is no greater antidote for capitalism other than selfless love encouraged by religion. Nobody would take socialism nowadays except for religious people. Modern people tend to bash other just to survive and modern rationalization tend to set aside other people.

But, to move others, you have to invest a lot. Not just your money. Not just your time. Not just to be emotionally engaged. There are more sacrifices as you lead them to what you have in mind.

I thought people in the church that have greater knowledge of the Word would understand. I was wrong. Even if people could rationally concluded the right path could not guaranteed the person chose the right thing. To be able to change mindset is a long term war.

For instance, I could not understand why a person could have a change of heart just in a blink of time. A person have sworn his heart to God. But, then later on the same week he turned upside down just because he was dumped by his girlfriend.

I don't know, never fall in love so deep before. I've just figured it out myself that being youth was also being mentally unstable. A lot of good words lost because of one or two bad example that trampled one's heart. Be it their parents, their friends and so on.

We need more time. And as the time we invest for it also made us not progressing much in other part. Some part of our lives also degrading and becoming rusty.

Whew, such a crazy dream. Could I stand this? To let go some dreams and lifetime opportunities just to be able to invest the right amount for this particular cause.

When they were to catch up and even surpassed me, there is this kind of jealousy inside. A competitive side of me that wished to be able to maintain my lead. It roars inside; longing for chasing my own dream.

Hey, I've just realized something. I've fathered a lot of people. [believe me, there is a long pause here...]

I have just realized something. When you have become parent, you have to shift your dream. Sometimes, you have to give up on them. You need to adjust your priorities. You have to make sure that there are enough resources for the children.

The hardest part of it is to have them strong enough to carry on. As the time goes by, they go separate ways. Yes, to have them becoming great and ditch us. Just watching them as we are slowly sinking.

Now I realize how great my Mom and Dad. Especially, their sacrifices for me to be able to be what I am today. They have gave up on certain things to let me to be the very best version of myself.

Reboot. As the title said, I need to do this, ditch everything and chasing my own dream. I need to rediscover myself. I was about to do that in this writing.

But, can I forget them and carry on my life into the next thing?

Something inside is always keep me stay away from that mind. I guess when you have attached emotionally to something, you could not be able to cut those. Instead, even if I have not gain anything from them. Just watching them succeed brought manly tears into my eyes.