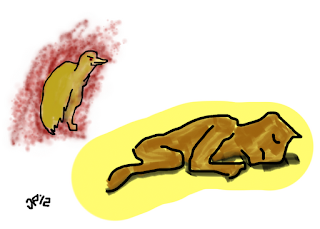 A photographer found a child lying on an African soil almost dying. A vulture near the child was watching for her. The photographer took a shot and let his professionalism as a journalist took a part. As a journalist, there should be no intervention.

He won the Pulitzer but he lost his humanity. He then died because of his own conscious.

There is no way being humanitarian become a blockade for professionalism. It should be the only exception when we should intervere. Keeping a work is keeping integrity, but a compassion is something that keeping conciousness.

We have at least two daily profession, one as a worker employed by workplace and one as a human employed by conciousness.