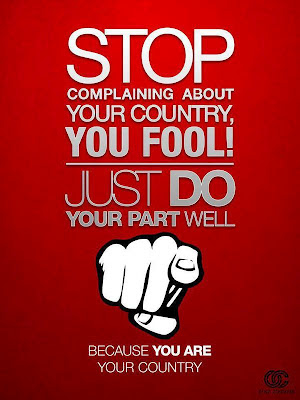 Mr Rogers was concerned by the lack of good educational TV program for children. He was supposed to be a minister. But, he decided to focus to build his own TV program.

Well, this poster reminds me of why I am become an active FOSS advocate. I feel like not want to explain it again and again. But, I do glad that I did choose to do it.

Have I done my part well? I hope I have. But, I don't dare to conclude it myself.

I knew back then that my expertise is one of the chronic of weak law enforcement. It created digital gap. It even put people away from many knowledge. That was why, I chose to be part of the problem solver.

I knew the resistance is high. To do something against the norm and kicking people out from their comfort zone. The risk was high and the pay seemed not really worth it.

Well, I wasn't alone. God protected my blind sides. I know faith is something that irrational. But, to think that something is irrational because it is still unproven itself is irrational, IMHO.

Anyway, the faith speaks for itself. Many people agreed with me and joined the cause. The results are paying off now. I am glad I did the right thing.

As pioneers, we are meant to be alone in the wild. Until something becomes mainstream, we the die hard fans are the only ones supported the idea. As a problem solver, we are the ones that trying to fill out the blank.

If you don't like it, then try to fix it yourself. Or, just shut up. Complaining will not get you anywhere, as the ethic of hackers: "talk is cheap, show me the code."

And coding is something that take time and mind to it. At some point where we are in the pinch of some nasty bugs, we might want to know is it worth it. But, remembering that this is for a good cause supported by a Prime Cause,

don't you feel that you are embraced and fully protected?

I know faith is something that could lead us into killing each other. But, if it is used for the sake of others, it becomes a relevant source of strength. For a big good cause, you need a faith to stand still.

I know there are also other non-pop that have positive attitude. Be it Christcore or One Finger Metal, all is good. Because, all I know the true religion is about getting people to their god(s) and becoming self-aware about the problem surrounding them. They are trying to answer the problem by what they know and believe.