A man in 16th March 2019 came to a Mosque in Christchurch, New Zealand (NZ). He shot randomly and killed 49 people and injured many. And the story goes on.

You can read the news. But, what I've observed is this: many of my Moslem friends called this an equality. While they are complimenting the NZ PM and her actions, they are also lamenting that the shooting was called "shooting", not "terrorism" immediately by many Western outlet. It was different when a Moslem done the deed.

Fortunately, after the NZ PM called this a terrorism, many began using "Terrorism" in their news. I think this point a little bit fair. Perhaps, the Media waiting for the NZ government to verify what type of things happen.

A right wing politician in Australia was also blaming the Moslem immigration over this accident. He raised a boy to be a hero to many because of it. The boy poked an egg to his head. With this, the boy statement is clear that people, even the Caucasian is in disagree with terrorism and segregation.

People may think that this is a right wing, skinhead, neo-NAZI, etc. Some of my Moslem friends also accusing that the Christians have done a terrorism in this particular case. What they don't know is that there is another sinister thing happens here.

What they don't know is, this man is a sociopath that was enticed in right-wing activism in a sh*tposting board! He is trolling with lives.

This also puzzles me. The most bad of I can think of from these kind of board is only cyber crime. Perhaps, when it is about human lives, they just randomly suggested a person with tendency of suicide for doing it for real.

They hate extreme views. They also have hate in pedophilia. And, they have the most hate to any cat abuser!

But, an online friend told me, these few months there are few extrimism that happened across the boards. This usually get pawned/deleted immediately by moderators and forum cleaners. But, because of the volume going on, they stopped at some point to try to stop these kind of forum.

I don't know how this sociopath thinking process or how he made up his mind to do this kind. I can tell you that he is not a Christian.

Here's what he post on 8Chan before the accident: 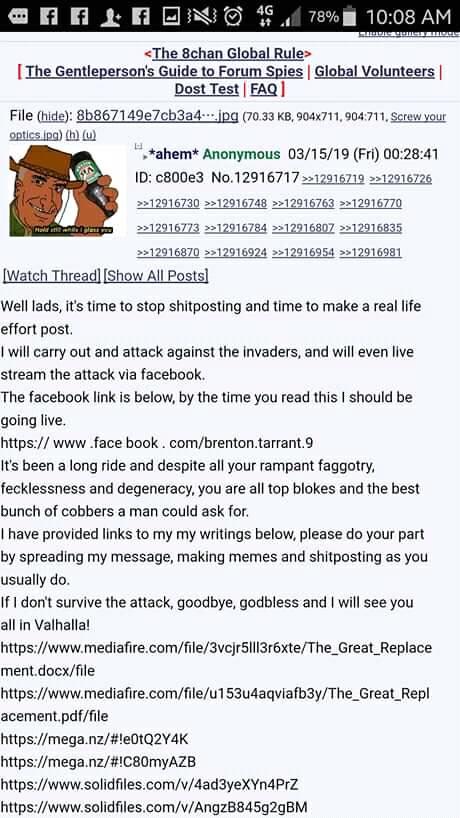 I don't think the mention of Valhalla is the indication of a religious person. And his 74 pages of The Great Replacement docs is downright a trolling.  Here's why I think so:


I may say that this is the dark side of the Internet.

I just wonder, how much pressure was made to this man to turn him into an insane person? He even meticulously provided 74-pages of ultra white supremacy. His words are elaborate but contains insanity and paradox.

If I can draw conclusion from 74-pages of his manifesto about his life. It seems he is bored and bitter about his condition. Perhaps, a boredom insanity that made him a sociopath.

What is his drive? I don't know. I guess we need to see further later on the news.

But, all I can say is, don't support or segregate terrorism. Terrorism is terrorism and have no value in religious belief, especially in Christianity (which I can be assured to tell that).

Is this society so sick to create such boredom?